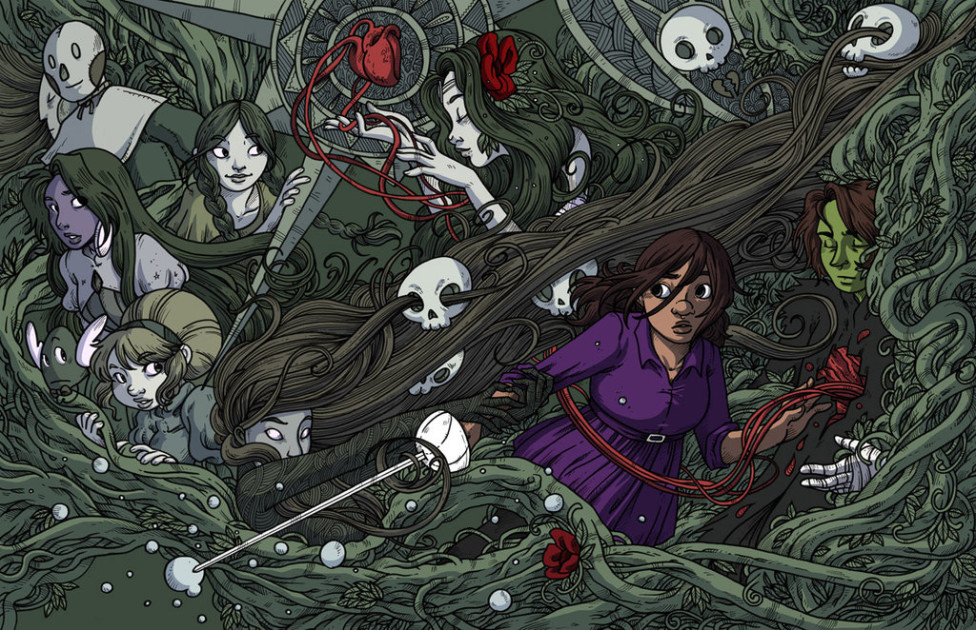 “Namesake” Unveils the Dark Truths Behind Fairy Tales and Their Heroes

Namesake is the long-running collaboration between writer Megan Lavey-Heaton and artist Isabelle Melançon, who together set out to tell a story about how stories effect both the lives of their readers and their own characters.

Emma Crewe is many things: a web developer, a responsible sister, an ordinary, sensible human being.  But all that changes when a strange encounter at the library leads to an unplanned arrival in the land of Oz. Yes, we’re talking Frank L. Baum’s Oz, yellow brick road included, though it’s a bit more sinister than fans might remember.  Emma soon discovers she is a Namesake, a human hero with the power to travel between fictional worlds, with the expectation that she will act out a destined role as the protagonist of their stories. Emma must attempt to escape a war-torn Oz and return home, while also learning more of the mysterious disappearance of their ruler Ozma.  Meanwhile in the real world, her sister Elaine desperately searches for Emma, becoming embroiled in a centuries-old battle between Calliope, an organization that seeks out new Namesakes, and the secretive and dangerous Rippers.

Imaginative, beautiful, and at times terrifying, Namesake has breathed new life into old fables, reminding us exactly why we flocked to these works of fiction in our youth.  The world and its possibilities are vast and the characters manage to be both wickedly charming and utterly flawed.  Lavey-Heaton and Melançon have developed a comic that is exciting and heartwarming in its sincerity, and completely addicting as they pull you ever deeper down their own personal rabbit-hole.  And amazingly, while retaining a strong dose of originality, the creators have also wiped away the patina and held up the looking glass to these timeless stories, asking the ever puzzling question “If your story is already written, how can you change your destiny?”