You’ll probably recognize Third Eye Crime even if you’ve never heard of it. The game opens in a world outlined in heavy ink, sultry music pouring in through your headphones. A protagonist who says “yer” instead of “your” and wears a trench coat. Baby, it’s film noir.

Rathko is a thief, and an excellent one at that. Sure, some of it has to do with his physical abilities, but he’s got an edge that makes him nigh untouchable–he’s psychic. And he’s content pilfering paintings from museums until a redheaded dame with pouty lips slinks through the door and hires him to steal something for her. But all is not as it seems…in fact, when is it ever?

Third Eye Crime is a maze puzzler available on iOS and through Steam. Draw a path for Rathko to follow. His psychic abilities predict the movements of the security guards around him, but escape isn’t the only item on his agenda. After all, what good is a thief that never steals anything? Third Eye Crime can be incredibly difficult, especially if you want to get all three badges for a level, escape undetected, and collect whatever loot’s along the way, and most levels take a couple tries to complete.

And, of course, the graphics! Third Eye Crime looks like a comic book sprung to life, complete with sliding panels to progress the story. It’s stylish, sleek, and slick, beautifully evocative of noir, a genre where every hardboiled man in a trench coat has a dark past and every beautiful woman has a gun strapped to her thigh. Third Eye Crime doesn’t disappoint. 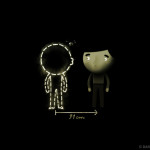