A Life Illustrated: A Conversation With Lucy Knisley

As a critically acclaimed author, celebrated cartoonist, and comics wunderkind with nearly 10 years of published works under her belt, Lucy Knisley is a perennial favorite of this reviewer. Known for her witty, thoughtful, and deeply personal autobiographical works, Lucy has made a name for herself with books like French Milk, Relish, An Age of License, and most recently, Displacement. An Age of License and Displacement are companion travelogues, published through Fantagraphics Books, detailing the events of two separate trips taken several months apart. The first is an exploration of freedom, youth, and love, while the latter is a sobering glimpse into the realities of aging, memory-loss, and caring for the elderly. For further information about these books, you can read my reviews here and here.

Recently I had the chance to sit down with Lucy at The Strand Bookstore in Manhattan and interview her about Displacement, her new work, and her experiences as an graphic memoirist:

For those not familiar, could you describe how you make travelogues and what the experience is like?

My first published travelogue was called French Milk and I wrote it when I was twenty or so.  I had set myself a challenge: I was about to graduate from art school and I wanted to see if I had it in me to bring my work into a storytelling realm. I was already making comics for my school newspaper, but I wanted to tell longer form stories. My mother was turning 50 and we were both at these turning points in our lives, and I had the sense that it would be something I wanted to memorialize in this way. So I began to keep a drawn journal.

I wrote every night and I would draw every night, which is something that is incredibly difficult to do in most travel situations? At the end of the day after walking around, eating and seeing the sites, you don’t want to spend three hours drawing about what you just experienced. It really took an effort of will to do it. But, while doing it, I started to develop an instinct and the muscle memory it takes to do this, and I kind of got addicted.

The travelogue thing really is an addiction of mine. I have the rare trip where I won’t keep one. I usually set myself a page limit, but for certain trips, like this one, I sort of let myself get a little out of control (this includes watercoloring every page by hand).

What’s nice about travelogues is that they can allow you to see it from a little bit of a distance while you’re experiencing it, especially if it’s something that’s difficult to undergo. In this particular instance, that was being in close proximity to my grandparents and watching their slow decline, which is very scary to face on your own in an ocean! It was really nice to give myself a little bit of distance and sort of process what I was going through at the time and to tell the story of this experience and try to find the humor in it. 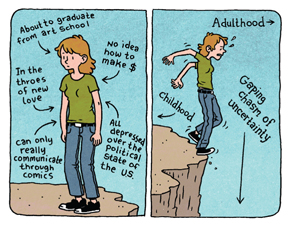 This book was written in February 2012 and deals a lot with fear of aging and the weight of responsibility. Do you feel that, three years later, the experience has changed the way you view these things?

It’s certainly changed the way I view the cruise ship industry! While I’d been to the Caribbean before, I’d never really experienced what it was like to go on a cruise ship. I found myself to be NOT a cruise person; it was terrifying! I was trapped on a ship that had been shut down twice due to Norovirus outbreaks. I was pretty sure we were gonna die.

It also changed the way I think of myself, and really in the end it was nice to spend some time one-on-one with my grandparents, to connect with them a bit. And as to aging, I just turned 30 yesterday and I was OK with it. So yeah, thumbs up to aging.

You frame each day of the journey with an excerpt of your grandfather’s war memorial. A lot of your work deals with the ability of stories to transcend time and space. Was the inclusion of the memoir something you were doing alongside your own travelogue or a decision you made later?

That happened really organically. I was rereading the memoir at the time because I thought that I would pry more information out of my grandfather over the course of the trip and talk to him about the details of his amazing stories. Both my grandparents are so grounded in this period of time, they have such vivid memories of their wartime experiences and yet they can’t remember what they ate for breakfast that morning.

It was interesting because something that can happen with memoir is that other characters become dehumanized a little bit, because you’re seeing everybody through the author’s point of view. I didn’t want that to happen with my grandparents, especially with my grandfather. I wanted people to see the loss of their identity as human beings, and to represent that somehow. And I thought this was a good way to show how my grandfather has gone from being the storyteller to being the subject of the story, and also to show how sad it can be to see that decline in loved ones, and to watch those memories just vanish.

You’re most well-known for your autobiographical works.  What about autobio do you think is so engaging to readers and what about it for you as a storyteller makes you want to continue doing it?

A horrible sickness and compulsion? [laughter]  No, I love autobio and I read a great deal of it. It’s great how so many people seem to be doing it…It’s interesting to see how much control the autobiographical memoirist has. A prose memoirist writes “Here’s how I remember it,” but with a graphic memoirist you get “Here’s how I remember it and here’s what it looked like.” It adds this extra layer of experiential reading where the reader gets to see through their eyes and see their interpretation fully.

I love that aspect of control–to be able to take these stories that can be difficult or that I want to memorialize by taking them outside of my body and sharing them with people. And then I can give that control away to the reader who can interpret it as much as they want to.  They’re really encountering a past version of myself, who is basically a different person.

(Lucy proceeded to make a joke about comics being similar to horcruxes, and then admitted to being Lord Voldemort while I nearly had an aneurysm from laughing so hard.)

As a young professional who is making comics, what is your perspective on the industry and how it’s changing, and how specifically you and other young graphic memoirists like Liz Prince (Tomboy) and Jess Fink (We Can Fix It) are changing it?

I think this is also growing in other generations too, but I think that there’s a lot of power in younger women telling their personal stories as a voice that hasn’t been heard from in the past. For example though, Roz Chast’s book this year (Can’t We Talk About Something More Pleasant) is an older generational voice talking about the aging process (way better than I did in Displacement). It was dealing with the decline of her parents and her own place in that, and I found that I was writing, from a generational gap, the same story, which I think is so interesting.

There are all these great stories coming out. I love these personal stories and it’s so fun getting to meet the people that write them. Alison Bechdel has the most beautiful hands, and all of her characters in her books have the same hands! They have these really beautiful, elegant hands and it’s so cool to have this connection to the real person and then to see it reflected in their work in such a visual way. I’ve known Liz Prince for years and know the exact shirt she’s drawing herself in. Jess Fink and I were Livejournal buddies in high school, so to see her writing books about her past and seeing her work published is so exciting to me.

It is so great to see that. It felt like when I was coming of age, there were a lot of male voices in the personal comics and memoir field. It’s so great to me to see how many younger women are now telling their stories and gaining a voice in this regard. Especially considering the traditional male-dominated superhero comics field, it’s great that women have sort of taken over graphic memoir. 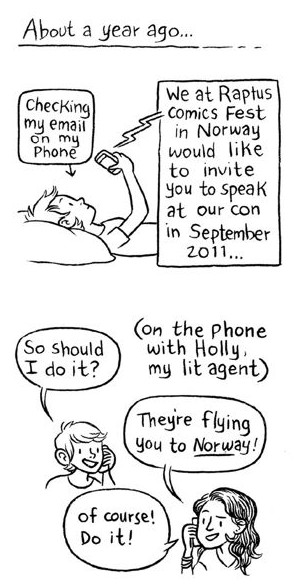 I remember when French Milk came out I got this hilarious email. Keep in mind I was 20 and graduating from college, I was full of doubt and insecurity and fighting with my mom on the trip and getting my period everywhere. And I got this email from this woman who said, “I think it’s terrible that you’re depicting this character as such a weak female presence. You should be showing strong female characters.”

And I am a real person and a woman, and I think I should be allowed to get my period and fight with my mother and be a big baby, and STILL be considered a strong female character. But it’s also the fact that I’m telling the truth. I’m not trying to show myself saving the world or through a filter, I’m trying to show what it was like for myself at that time.

I think it’s easier for someone to see a character who’s a mess and still a strong character to then relate and reflect that in their own life. The most reassuring thing I realized in my twenties is that no one has their shit together, and it’s nice to see that it’s not the case and connect to readers who are feeling the same way.

I think the travel aspect of the travelogues is secondary to the periods of transition in my life when they were written. A trip is a very excellent way to memorialize that, and when you travel you have a little distance from your life and you can recognize the ways you are growing and changing.

In both An Age of License and Displacement there’s more going on than just the trip itself. I hope Displacement becomes meaningful to people who would need it, perhaps. And also warn them about the dangers of cruise ships!

Many Thanks to Lucy Knisley, Michael Chin, The Strand Bookstore, and Fantagraphics Books for making this interview possible.