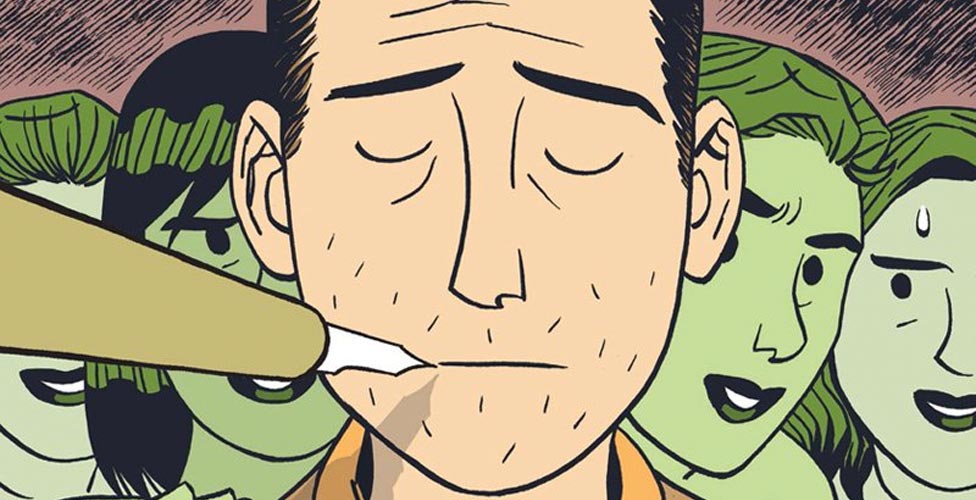 New Zealand cartoonist Dylan Horrocks is well known both in the realms of original and superhero comics, receiving acclaim for his Harvey and Ignatz Award-winning works Pickle and Hicksville and writing for both Vertigo and DC, just to name a few of his accomplishments.  Over the course of a decade Horrocks has been involved in nearly all aspects of the comics process but had not put out an original graphic novel since Hicksville in 1998 (revised & reissued by Drawn & Quarterly in 2010).

Now in his new and eagerly anticipated book, Sam Zabel and the Magic Pen, Horrocks cohesively blends the lines between autobiography, fantastical fiction, and the meta dissection of comics as both an art form and a mean of escapism. The main character, Sam Zabel, bears no small resemblance to Horrocks himself. A Kiwi cartoonist who hasn’t drawn for himself in 10 years, and desperate to regain the inspiration that led to his successful first book (also called Pickle), Zabel finds himself on a journey to understand not only his own relationship with comics, but also the reasons people are driven to them in the first place.  Sam travels with his companions, webcomic & zine artist Alice and the mysterious teen genius Miki, literally through several comics and a myriad of genres in search of the fabled “magic pen,” a tool that gives any artist who wields it the power to create entire living worlds through their art.

A work like The Magic Pen can come dangerously close to navel-gazing, but Horrocks tempers this with truly thoughtful characters, all of them possessing their own thoughts and perspectives. While he does divert from the plot into discussions of the morality of fantasy, as well as the responsibility of creators for the lessons they teach in their comics, he always manages to impart some emotion and human fallibility into these asides. Most of all, this book is about creativity; its genesis, evolution, and ultimately, its effect on humanity and art.

Sam Zabel and the Magic Pen is not what I’d call a casual read, but for anyone who is a creator, who struggles with their own self-doubt, or who wonders why they are drawn to comics at all, this is an excellent book.