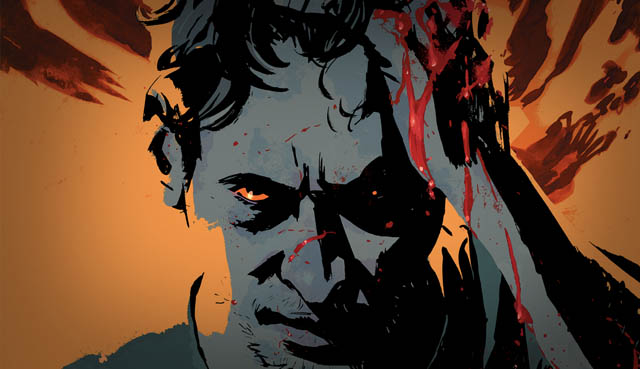 Fight Demons Alongside an Exorcist in “Outcast”

Best known for The Walking Dead, Robert Kirkman’s new graphic novel Outcast is a delightfully creepy tale about an exorcist named Kyle Barnes who has been plagued by demons all his life. But when he finally decides to hunt for answers, it turns out what he’s looking for could lead to the end of humankind. Although Kyle is very talented at getting rid of demons of the supernatural variety, he can’t seem to get rid of his own personal demons, which are clearly weighing down his soul.

Kyle becomes an exorcist because, much like Dean Winchester from Supernatural, he hopes that saving people will make up for the terrible tragedy that befell his family. In Kyle’s case, he’s trying to atone for not being strong enough to save his mother, child, and wife from the demonic forces that plague him. His traumatic experiences is what drives him to become a force for good, especially since the town believes he’s an abusive husband.

He also slowly discovers the power of friendship, thanks to a kind reverend. Together, the two take on the demonic forces in an attempt to beat back the darkness. Unlike most exorcism tales, the reverend isn’t your typical “man of God”—just like Kyle, he’s a flawed man, too, because he uses church funds to pay off his gambling debts, swears like a sailor, and likes to drink as well.

In the dark, gritty world of Outcast, the heroes that are not actually heroes, which makes this series all the more fascinating to sink into.