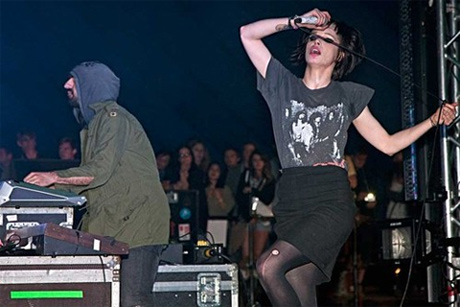 The Complete Guide to the Hipster Boy/Girl Duo

Earlier this last week while writing a review of Altar Eagle‘s Nightrunners for my own blog, I mentioned how exhausted I was with these “hipster” boy/girl duos that seem to be everywhere at the moment. Not to say that boy/girl duos are something new (because they aren’t), but there’s something especially unique about this type of duo (and as much as everyone hates the overuse of the word “hipster,” it’s the most accurate word I can think of at the moment). So, what makes the hipster boy/girl duo different from regular boy/girl duo acts? Here are three observations that I have found:

The problem with the rise of hipster boy/girl duo acts is that the formula is so lazy that just about anyone can do it. After all, they’re not exactly the hardest bands to put together. All you need is one electro mastermind to actually create the music (or simply have access to a Macbook Pro), while the other member, usually the “girl,” simply sings over the tracks. Of course the responsibility of each member varies by group, but this boy-plays-music/girl-sings is the basic formula for the majority of these bands.

When I think of the quintessential boy/girl duo act, my mind immediately goes to Crystal Castles, a band that often falls into success through luck, especially when you think about their most famous track, “Alice Practice,” is an accidental song pieced together from singer Alice Glass randomly screaming into a microphone. Alice has later said that she had no idea that band member, Ethan Kath, was even recording a song. And that’s the main problem with these boy/girl acts — the power is uneven. Although no one can deny Alice’s contribution as a performer, her actual role is trivial: a visual “face” for the band to distract fans from what would otherwise be a dull performance.

I know there’s a bigger feminist argument in all of this (women who are only expected to sing/write lyrics but aren’t given the more technical/production-heavy jobs), but I’m going to stick with laziness and the ease of indie accessibility.  A lot of the bands listed here aren’t terrible bands, however, I find the boy/girl duo formula has swamped the landscape so much recently that newer bands are starting to adopt it, and the results aren’t pretty.

I was at a Julia Holter show earlier this year and she had two openers; one was the excellent Hundred Waters and the other was a self-described “Lynchian Pop” duo named Silent Drape Runners. The band consisted of one boy, who looked to be no older than 19, who spent the majority of the show with his head down, preoccupied with his keyboard/Macbook, and one girl who spent the majority of the set dancing around the stage, talking over the music and checking her phone. At one point in the show, while the music was still going, she stopped to invite the audience to a party. “It’s a Robyn look-alike party,” she said while holding her iPhone up to her face. “And you guys are more than welcome to come.”

As I stood there in the audience being assaulted with strobe lights, images of cut-up anime videos and a really bad experimental remix of Carly Rae Jepson’s “Call Me Maybe,” I realized that I was old. And I know I’m not really old (I’m only 27), but I realized I had reached an age where I could no longer withstand a certain level of bullshit — like a bullshit threshold. I suddenly morphed into a 50-year-old man. I thought to myself “Who let these untalented children on stage!” and “That girl’s hair is cut too short!” (Just kidding about that last one.)

And that’s the problem with the hipster boy/girl formula. When you run it into the ground you get people like Silent Drape Runners polluting the landscape in a mission to be the next Sleigh Bells, and the whole thing dissolves into a parody. Fortunately, like most trends, this will die down. But until then, the phenomenon casts some startling light on people’s perception of electronic music and women in general. Exactly why does electro pop need a face, and why does that face have to be female? Not only does it show a lack of creativity it seems to reinstate old ideas about how electro pop should be performed. I just wish people would start playing around with this a bit more.  Music doesn’t need formulas, and never has.