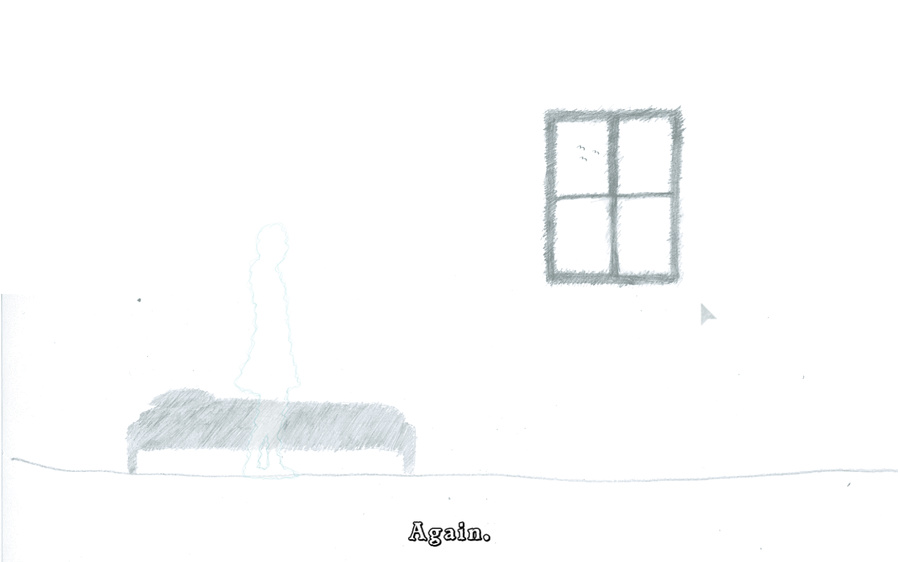 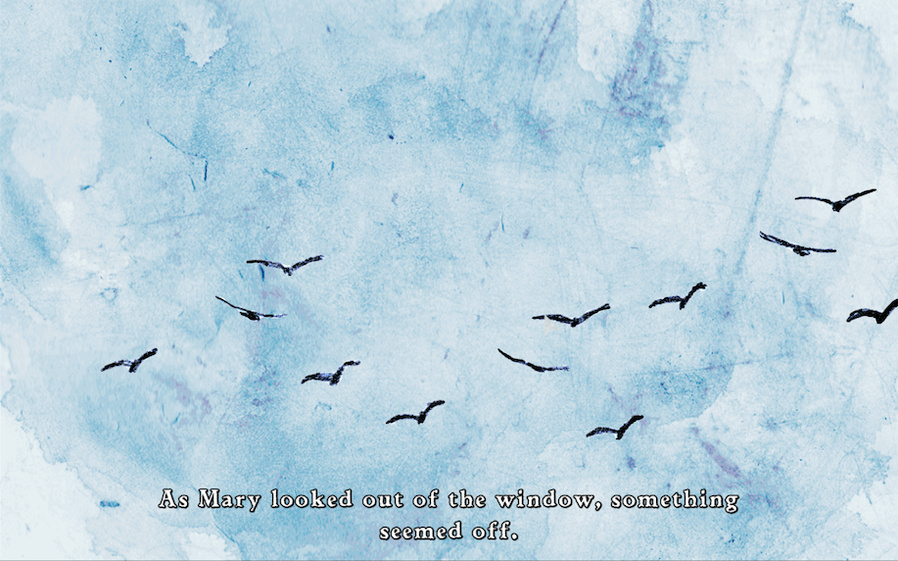 A game about a dream set within a dream where the dreamer questions the nature of her reality and struggles to wake up can hardly avoid comparisons to Inception or The Matrix. But Mary Woke Up Today is distinct, visually and thematically. Her translucent figure moves through a blurry, watercolor world that melts and shifts around her. And, just like in dreams, even though nothing makes sense, it’s hard to question what’s going on.

In one scene that stands out, Mary Woke Up Today evokes such a sense of discomfort and unease that I actually stopped playing for a few minutes. Sure, the game mostly revolves around traveling from room to room and answering questions posed by indistinct, friendly but ominous characters, but when the colors change, the atmosphere and ambiance become so unsettling that it’s hard to continue. Mary Woke Up Today is a fantastic game, but this moment taps so deeply and honestly into fear that I would not hesitate to call it a work of art. 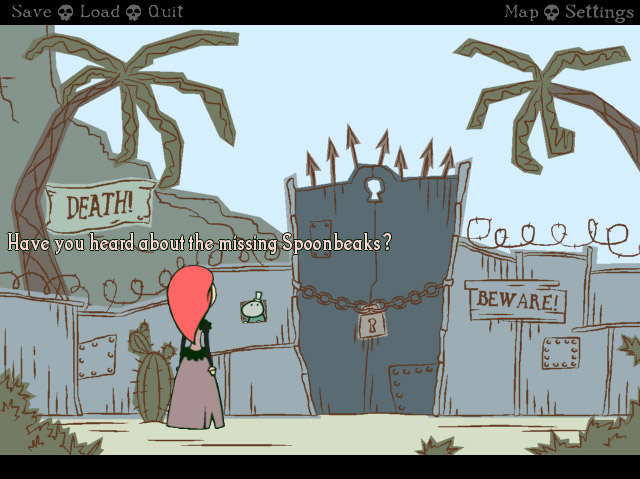 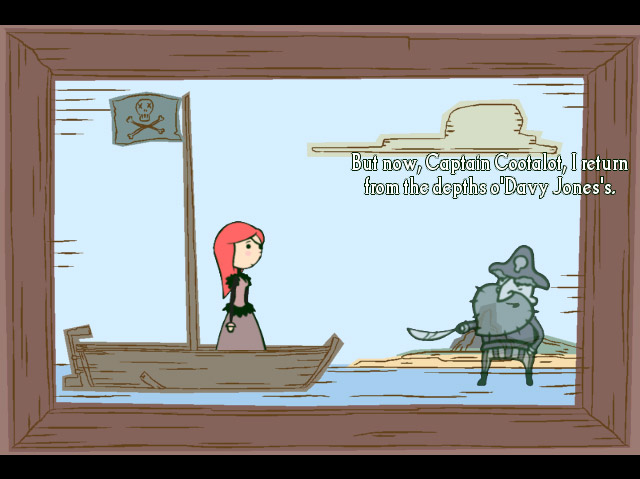 Birds, Beards, and Other Pirate-y Things Abound in “Nelly Cootalot”

A point-and-click adventure game about an aspiring pirate? Well, fear not, mateys–Nelly Cootalot may be taking her cues from Guybrush Threepwood, but Nelly Cootalot: Spoonbeaks Ahoy! is no knockoff.

What is Nelly Cootalot’s quest? The quest so important and crucial that the ghost of Captain Bloodbeard rises from the grave to ask for her help? Spoonbeaks, the island’s native birds, have gone missing. Nelly, who in addition to being an aspiring pirate is also an animal enthusiast, wastes no time in accepting her mission and sets off to figure out what Baron Widebeard has done to the spoonbeaks, encountering a wide cast of colorful and appropriately pirate-y characters.

Made in 2007 as Alasdair Beckett’s first adventure game effort, Spoonbeaks Ahoy! has aged surprisingly well into 2015–just in time for the sequel, The Fowl Fleet. Beckett has a strong talent for comedic writing. In Nelly Cootalot, his pinpoint comedic timing is paired nicely with a soft, pastel color scheme and scribbly art.

If you’re looking for a short, traditional adventure game, Anna’s Quest: Winfriede’s Tower is a remarkable addition to the genre. Made entirely by one man, Anna’s Quest is a short story about a girl trapped in a tower by an evil witch. Anna is no Rapunzel, though. For one thing, instead of long golden hair, Anna can move things with her mind. She can’t pronounce the word “telekinesis,” but she can bend spoons, which means the witch will stop at nothing to get her hands on that power.

Anna might be all sweetness and sugar with her pink dress and her black Mary Janes, but she has no intentions of staying in the tower and letting the witch control her. For one thing, her grandfather is very ill and Anna wants to return to him. Also rounding out the cast of characters is a large teddy bear that used to be a boy, an incredibly suspicious ghost named Joringel, and a magic mirror in the basement that speaks only in riddles. Special mention must go out to Holly Stevenson, the voice of the witch, whose old lady tones drip with anger and menace. Her performance is so convincing that interaction with her really did fill me with dread.

END_OF_DOCUMENT_TOKEN_TO_BE_REPLACED 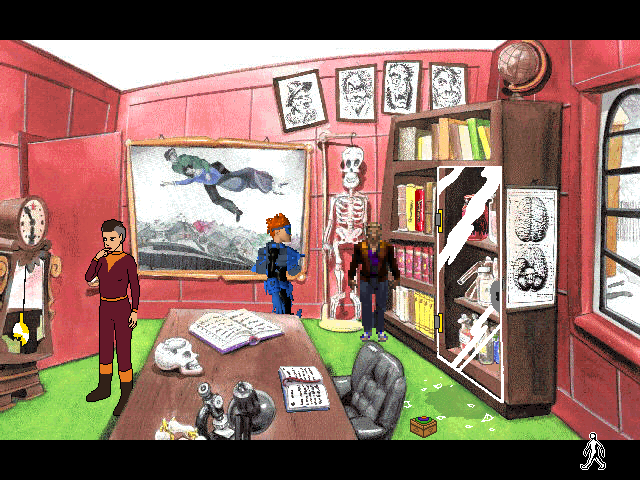 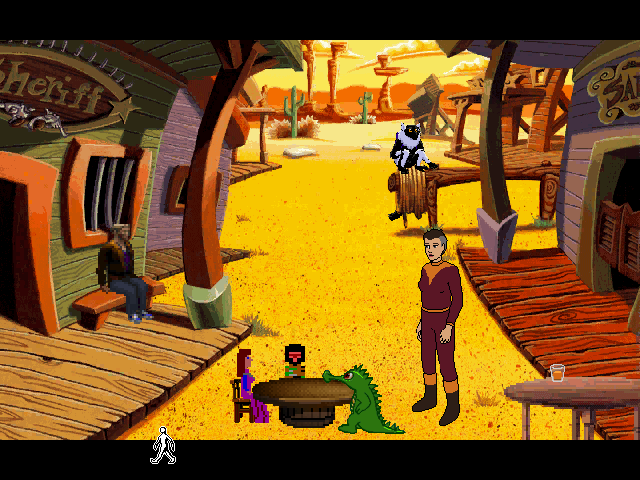 “Adventure: All in the Game” Is a Loving Homage to Classic Adventure Games

As soon as the first screen of Adventure: All in the Game loads, you’re probably gonna think: oh my god, they really know their stuff. Right away, Akril asks you how extensive your knowledge of adventure games is. Your options are Minimal, Adequate, and Extensive, and if you’re curious, yes, that does affect the dialogue as characters provide context for their jokes and references.

I thought I fell solidly in the “Adequate” category, by the way, but this game proved me wrong. Thalia James is an agent of the CGMS, or the Computer Game Management Squad, dedicated to keeping 2D games running nice and smooth and free of external or internal interference. But the CGMS is short on agents, so Thalia finds herself dealing with a trigger-happy new recruit from the Action-Adventure genre whose “shoot first think never” tactics contrast her own puzzle-solving philosophy. And, just like in every game ever, there’s a larger conspiracy afoot beneath the surface, and Agent James might be the only one who can do something about it.

END_OF_DOCUMENT_TOKEN_TO_BE_REPLACED 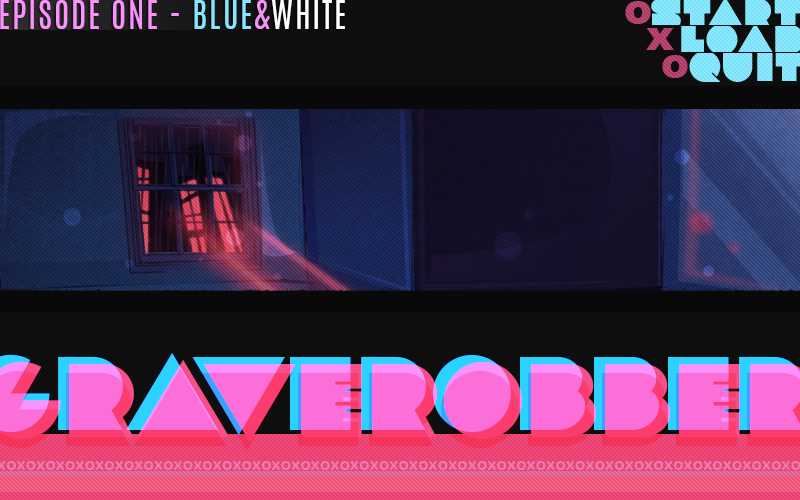 Visual novel Graverobber‘s primary appeal is its aesthetic. Glancing through the screenshots, it’s hard not to want to pick up the game immediately just to let your eyes devour the hypersaturated neon palette, which beautifully complements the 90s noir vibe the game evokes. But Graverobber takes its visual novel premise a step further and introduces several puzzle and point-and-click elements that puts the player-reader in an active role.

Episode 1 sees the introduction of our four protagonists: Sasha, a famous graverobber whose morality skews a little south of average; Ellery, the ghost whose grave he robbed; Barnaby, skeevy bartender and Sasha’s only ally; and Detective Copper, an obsessive law enforcement officer determined to bring Sasha to justice. And who can blame him? Sasha is, after all, stealing from the dead with zero hint of remorse, though Ellery seems determined to make Sasha face the consequences of his actions one way or another. Of course, Sasha could just dump Ellery by returning the stolen watch, but where’s the story in that?