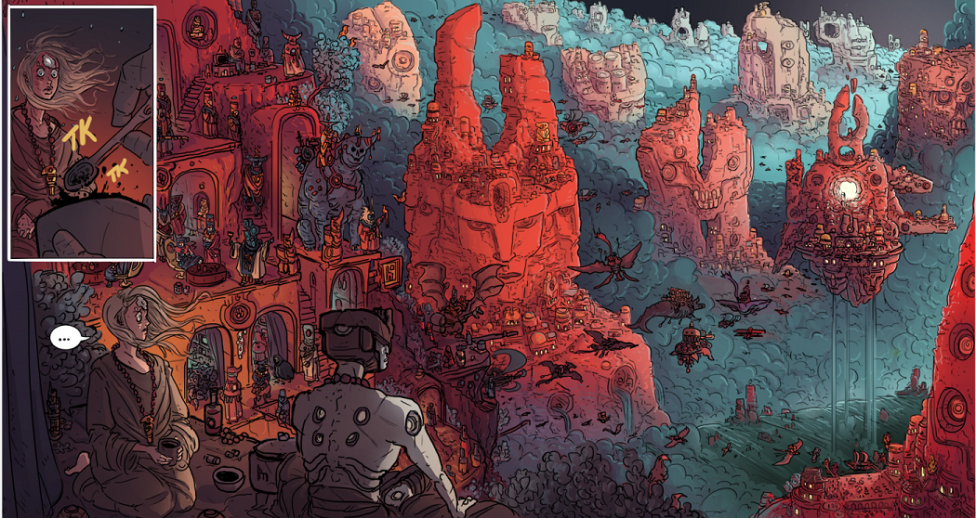 All Allison wanted to do was spend a nice night with her boyfriend and maybe even give it a go at having sex, which is complicated enough on its own. Then things get really weird when a giant monster appears in her bedroom, her boyfriend is whisked away to another dimension, and a magic key is jammed directly into Allison’s skull.

Allison finds herself exiled and alone in the frightening and dangerous world of Throne, the ancient home of gods, demons, angels, and heroes, and the center of hundreds of thousands of universes.  She attracts the attention of an angelic Peacekeeper who is anything but merciful, and is thrown into the tumultuous underbelly of Throne’s demonic bureaucracy, filled with all manner of creatures who want to dissect, enslave, or eat her.  Allison will have to muster her courage and unlock her own potential if she ever wants to make it back home again in one piece.

Gritty, imaginative, and gorgeous, Kill Six Billion Demons looks like it could be the love child of Quentin Tarantino and the Book of Revelations.  Brimming with it’s own rich mythology and colorful environment, creator Tom Parkinson-Morgan’s work shines as an example of the immersive brand of storytelling webcomics provide.  The narrative  is heavily influenced by audience suggestion, and the website offers the option for readers to submit their own designs, characters, and ideas to the “Concordance,” the author’s omnipresent avatar.

In addition to a lush and densely populated story, Kill Six Billion Demons also routinely offers snippets of design and worldbuilding in the form of the “Daemonaic” and “Liturgy” sections, pulling readers ever deeper into the surreal and complex realm of Throne and its inhabitants.

Barely out of its infancy with only 43 pages, Kill Six Billion Demons has already gained a loyal following, and is turning heads with its stunning aesthetic and engrossing detail.