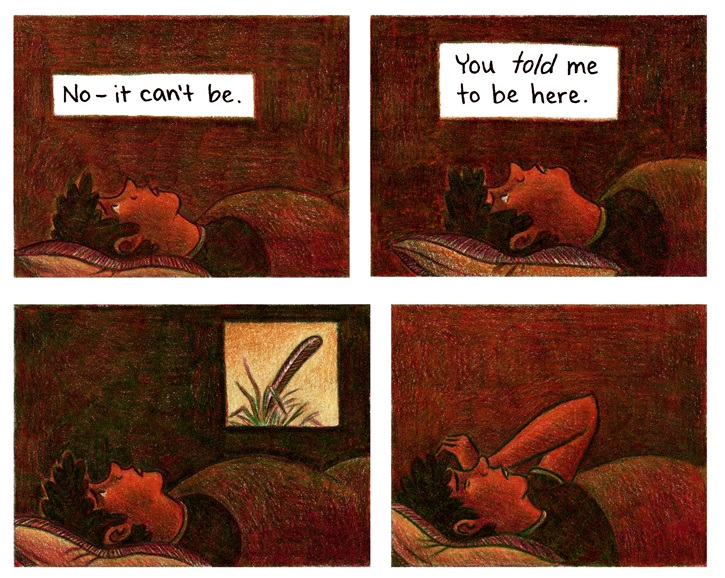 As The Crow Flies is the award-nominated coming-of-age story of Charlie, a thirteen year old queer girl who enrolls against her better judgement into an all-girls Christian wilderness retreat.  Not only is Charlie the only African-American girl there, but it becomes apparent that this proclaimed “feminist backpacking camp” hasn’t done much to welcome or include young women who are not white, straight, and privileged.

Stranded and afraid for her safety, Charlie finds herself doubting her connection to God, a connection which apparently brought her to the camp in the first place.  Torn between her desire to understand a God that no one else seems to recognize and her desperate need to express her identity, compounded by the physical hardship of the hike, Charlie’s journey becomes a trial of faith, strength, and patience.

Beautifully rendered entirely in colored pencil, As The Crow Flies is an honest, thoughtful, and earnest look at the subtle ways racism and homophobia can affect even the most well-meaning people, and the fears that permeate the minds of young LGBTQ teens who are growing up in a world that is often unsafe for them.  Charlie’s struggle is multi-layered, a combination of her own budding sexuality, self-doubt, and frustrated determination to not have her identity forgotten or erased by those around her.  The characters surrounding her are neither malicious nor aware of their own failings, and it makes the story all the more realistic for its portrayal of systematic and unintentional oppression.

Self-proclaimed “queertoonist” Melanie Gillman creates not only stunning visuals but an engrossing sense of environment and atmosphere using color and light to compliment the pastoral isolation that surrounds Charlie’s journey.  As The Crow Flies is not only excellent YA literature, it’s the type of work that I feel should be required reading for its realistic and nuanced portrayal of the world we live in and the ongoing fight the LGBTQ community faces.