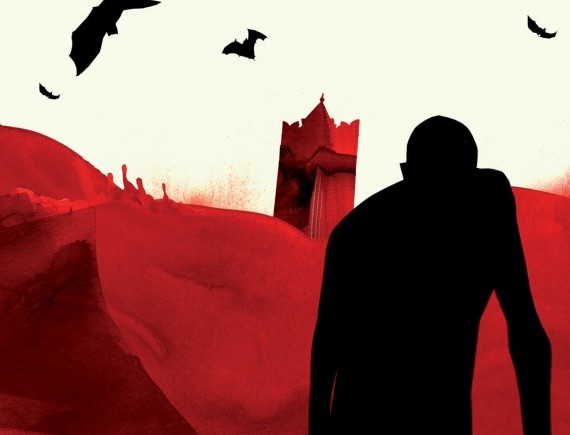 Vampires (and werewolves) are pretty cool.  In fact, they’re something of a cliche as of late, with how trendy they have become (though one could argue that it’s less of a recent trend and more of a constant ebb and flow of influence since pop-culture as we know it began to form).  Despite everyone loving everything from Let The Right One In to Twilight, I’ve found that a solid amount of people haven’t read Dracula by Bram Stoker, the classic that started it all (a sin I was guilty of myself until recently).  Here are five solid reasons why you should pick the book up:

1) It functions as an encyclopedia for Vampire myth.  One of the tricky things about monster myth is that the attributes and stories of monsters vary from place to place and weren’t often written down for various reasons until a certain point (the Enlightenment for vampires, but the range goes up to the 20th and 21st centuries for others like mermaids ).  Bram Stoker knew this in 1897 and did his research for this book.  The attributes and behaviors of Dracula and his brides, as well as the people affected in their daily lives by his brood, are all drawn from actual folklore.  The character of Dracula is the first fictional character to embody what the vampire was when you summarized the various interpretations and understandings.

2) You know that suspense in film that comes from knowing what’s going to happen but not when?  Here is its predecessor. It’s a basic theme in horror and suspense film that what is truly frightening isn’t what’s going to happen but the knowledge that it might.  This is the same tool used by Stoker throughout most of the novel.  He arranges the novel in a way that jumps periodically through time and space, from Transylvania to England, from after a shipwreck to before a shipwreck, and various other shifts throughout the story.  We are kept in suspense knowing that something awful will happen but not how, not when, and knowing we can’t tell the players what this awful thing is.

3) A strong female lead in 1897?  Yes way. OK sure, so Mina Harker isn’t the main character, but she is one of them, and from the very beginning is presented as an equal to her husband, Johnathan.  She is an active, intelligent, innately useful character rather than simply a plot device, a set decoration, or a love interest.  What’s more, it’s worth noting that it’s Mina, not Johnathan, that Alan Moore picked up for The League of Extraordinary Gentlemen.

4) It’s not a romance. Vampire romance is not new.  Most vampire fiction before Dracula was about sexual perversion and sinful coercion.  Most vampire fiction now also has an element of romance, if it’s not the main theme (Fright Night comes to mind as a good exception).  Dracula does have elements of sexuality in it, with his wives and his interaction with Mina, but that isn’t the point of the story.  Dracula is about a monster of a man wanting to spread and to continue his reign unpunished and without resistance.

5) It’s short. OK, so this is kind of a cop-out answer.  It’s not actually short, but it’s shorter than Les Miserables and about half the size of the 5th Harry Potter book, so that’s something.  Anyway, it’s not a particularly difficult read because it doesn’t dwell on any one spot or any one character for very long.  You don’t get the opportunity to get complacent and bored and so the text speeds past.  The style is innovative and exciting even now, over 100 years later.  If you like vampires, if you like horror/suspense fiction, or if you just want a new book to read that isn’t about people pining over each other, you should read this classic if you haven’t already.

Uncover a Dangerous Group of Mystics in “The Bone Clocks”