For hip hop newbies Clipping, the trio’s music is just as important as their striking visual aesthetic. All the singles off their self-titled debut are accompanied with interesting, controversial videos, from the dizzying ode to neighborhood violence in “Inside Out” to the surreal spin on curb stomping in “Work Work.” However, with director  Carlos Lopez Estrada in the driver seat again, their video for the single “Get Up” takes a more minimalist approach, showing rapper Daveed Diggs lying on his back as an alarm clock buzzes in the background. A small blood stain on his shirt grows larger and larger until the camera pulls back and shows the gritty reality of what’s really happening. Although this could be interpreted as being a little too on the nose, the simplicity is what inevitably makes this video work. But warning: not recommended for those easily annoyed by clock alarms. 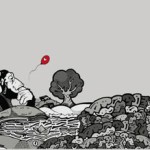