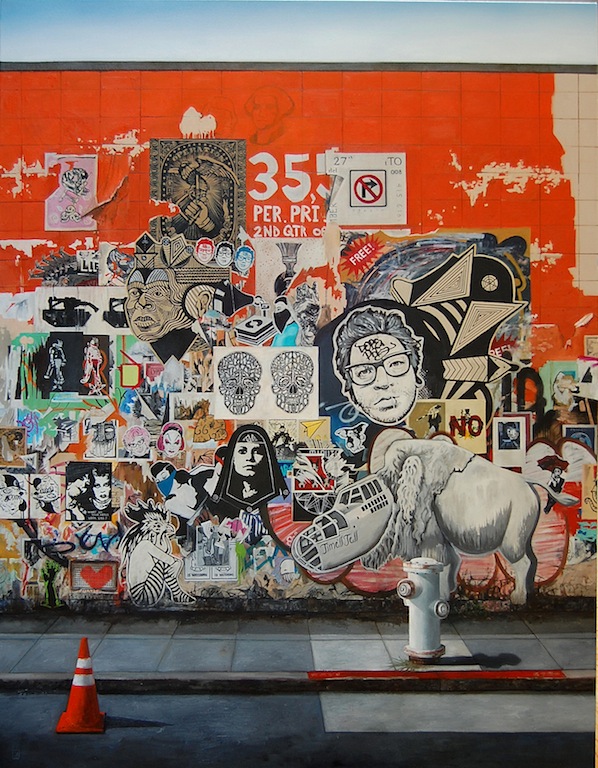 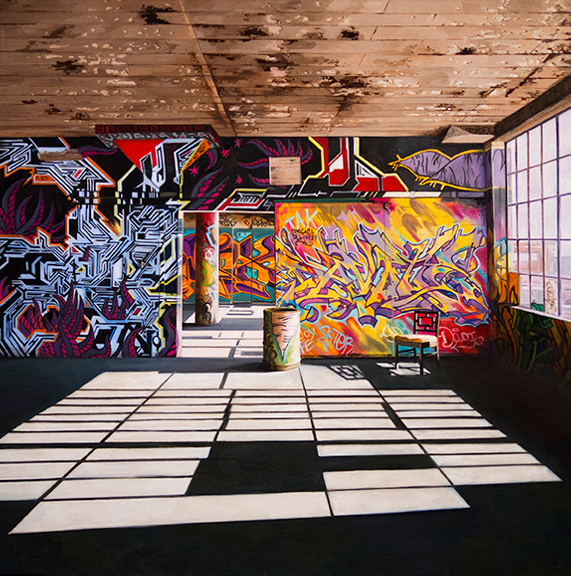 Bright, bold and always colorful, Jessica Hess‘s photorealistic urban landscape paintings say a lot about how we feel when we look at graffiti art. Constantly at war with each other, graffiti artists and the high brow art sect can’t seem to get along. Does graffiti art belong in an art gallery? Should graffiti on the street be treated as legitimate art? Thankfully, Hess’s work destroys that conversation, elevating the art of graffiti through simple landscape portraits that bring the art of the streets into the galleries. Her work is like a 2-for-1 deal, capturing the elusive world of urban art and bringing it to a larger audience. Because let’s be real: when is the next time you’re planning to visit Detroit? 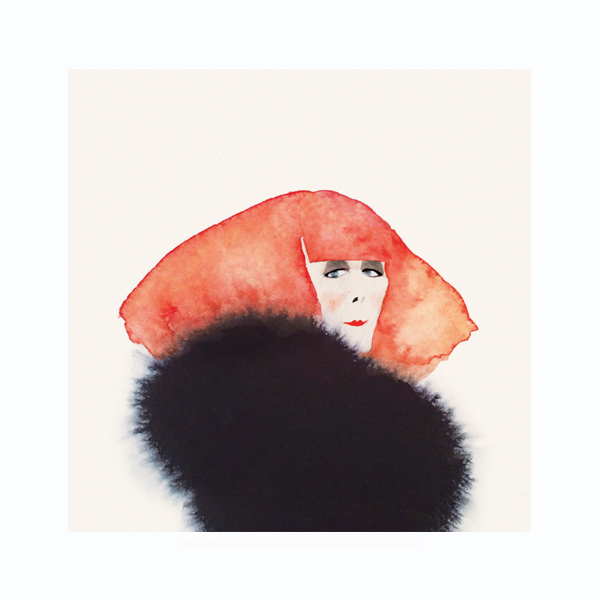 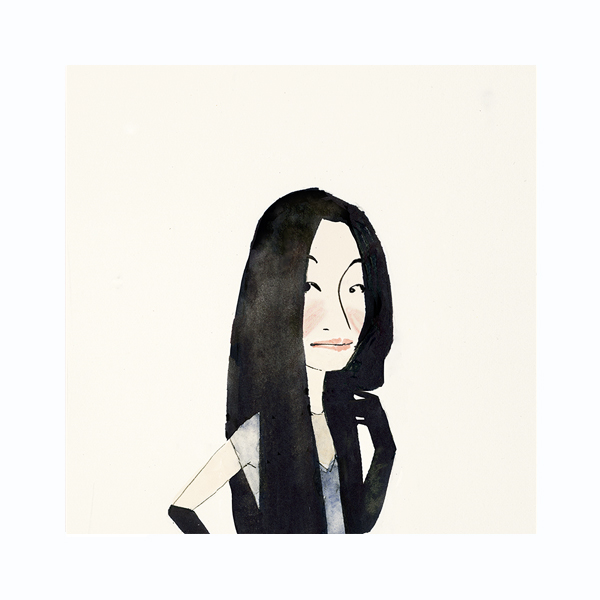 The best thing about Ryan McAmis‘s tiny water-color portraits of fashion designers is how recognizable certain figures become once they’re worthy of “icon” status. McAmis’s drawings aren’t particularly detailed, and they’re about as simple as a doodle on the inside of a Trapper Keeper. But one look of Sonia Rykiel’s asymmetrical red hair or Iris Apfel’s glasses or Rei Kawakubo’s polka dots and it’s obvious why they’re instantly recognizable. Much like Marlon Sassy’s hip-hop doodles, these portraits play on our knowledge of certain niche cultures. How well do you know your icons of the fashion world? Browse through to find out. (Hat tip: Fubiz) 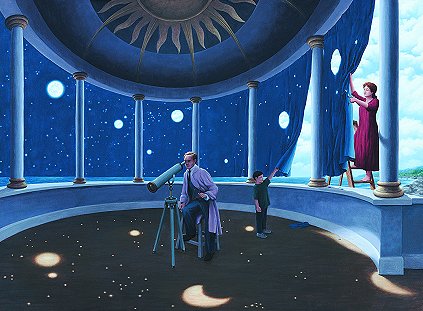 It’s a river… no… it’s a dozen water dancers dressed in white! These are the types of exclamations your brain will be shouting out to itself while you examine the work of fine artist Rob Gonsalves. A master of illusion, Gonsalves’ paintings often blur the line between the dream world and reality, creating scenery with multiple layers (both in meaning and aesthetically).

With more than 70 of these dreamscape paintings available online, Gonsalves’ work sincerely allows for a new perspective, turning the at-times bland world around us into something much more magical. Simply put, he’s an enchanter—a painter who can turn a field of cherry blossoms into a ski path…now that’s just marvelous. 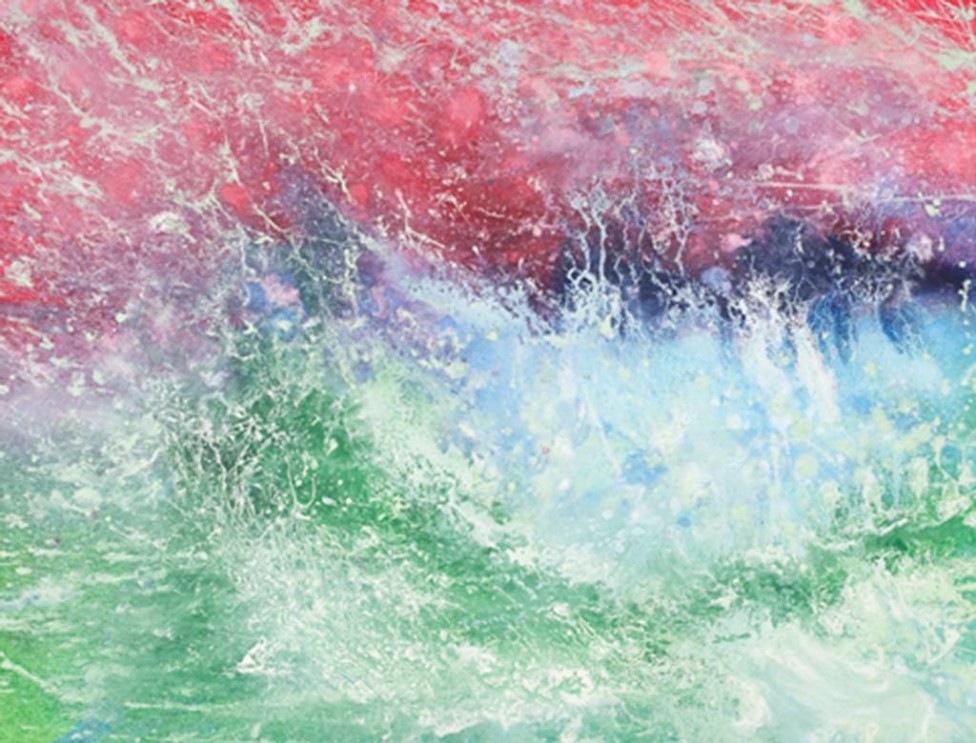 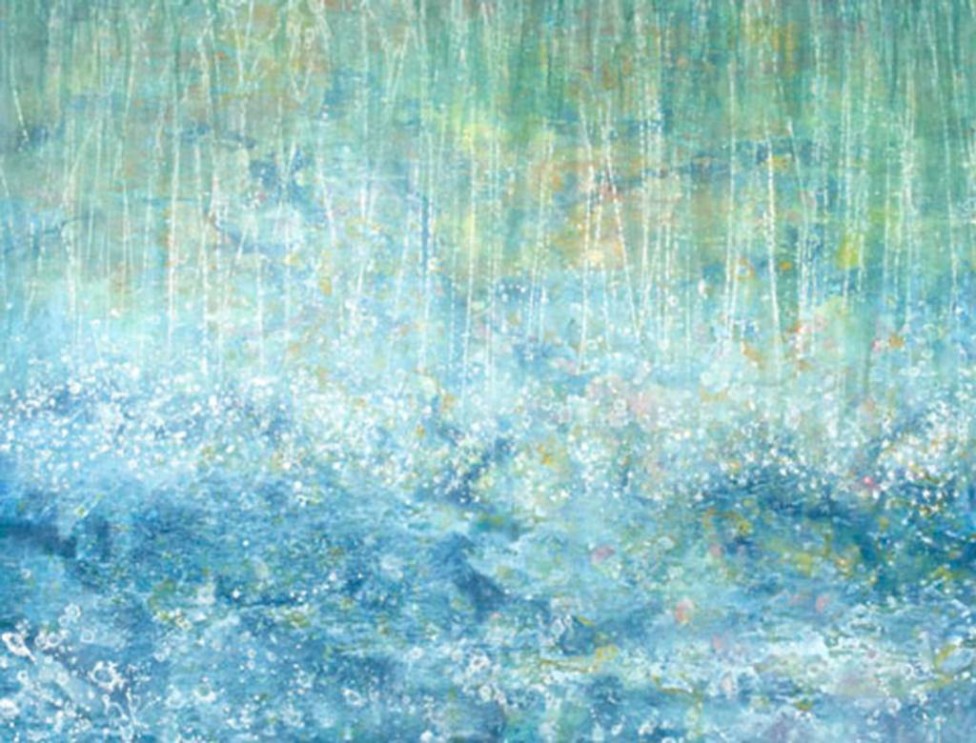 While these paintings may look like they could belong in Monet’s portfolio, they were actually made by a 5-year-old with autism. Yes, give yourself a moment to take that in.

At such a young and precious age, Iris Grace is not letting autism define her. In fact, she’s using it to her benefit, creating these masterfully abstract and impressionistic canvases. Iris may have difficulty communicating through words, but she has clearly found another medium that allows for her self-expression. Her artwork is inspiring in and of itself, and her personal story is just as lovely, helping to raise awareness for autism, and most significantly, demonstrating the ability to overcome the disease. 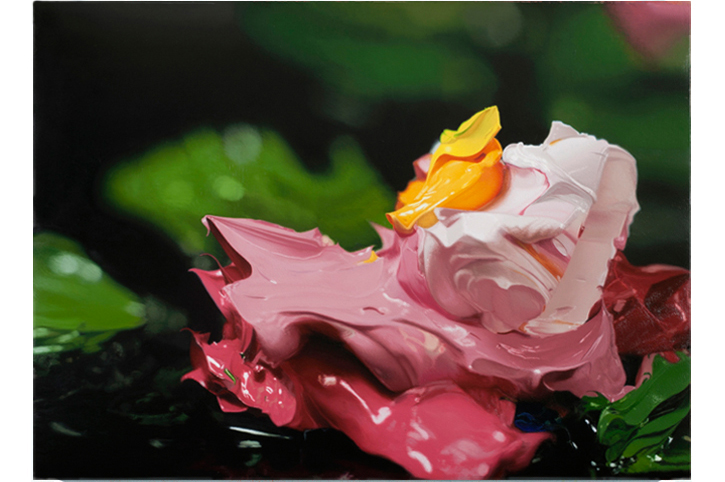 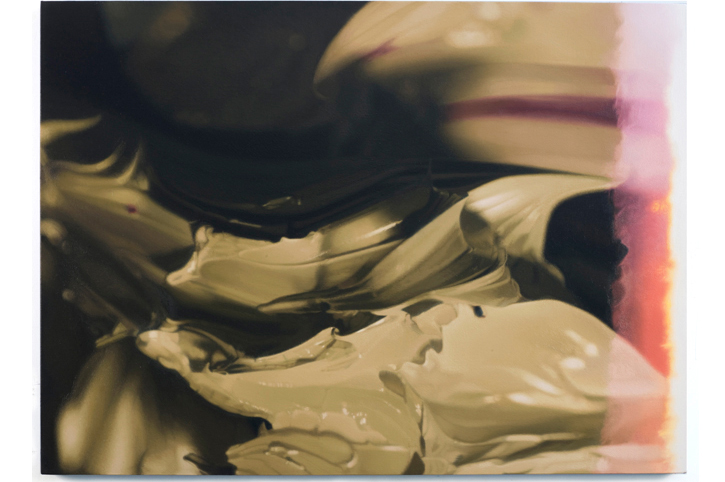 I don’t think it’s possible to get any more self-reflexive than Ben Weiner has in his series Paint Cycle. Weiner’s paintings of paint embody the idea of texture while remaining two dimensional in their execution, causing the brain to do a double take. Combining the worlds of photo realism and abstraction, two seemingly opposite ends of the spectrum, Paint Cycle explores the conceptual as much as it does the physical. Vivid, lush, and extremely detailed, the content of this work is just as interesting as its form. As Weiner himself states, it’s as much about the subject as it is the painter’s relationship to it:

“I think that conceptually it’s very much about still life and the relationship between a painter and an object and observing that object; distilling that image after several hours of observation.”

Needless to say, I’m obsessed and could observe the end results for as long as the painter did his subject. 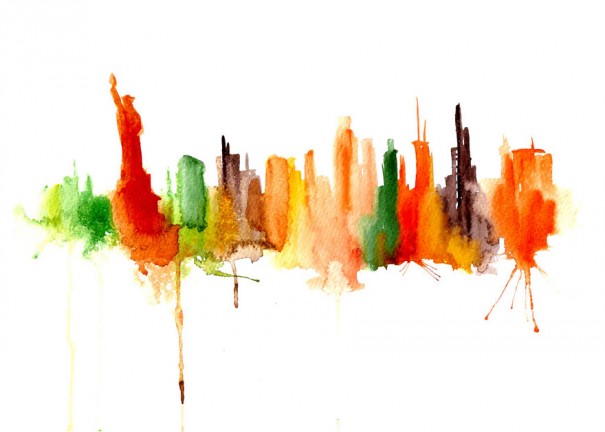 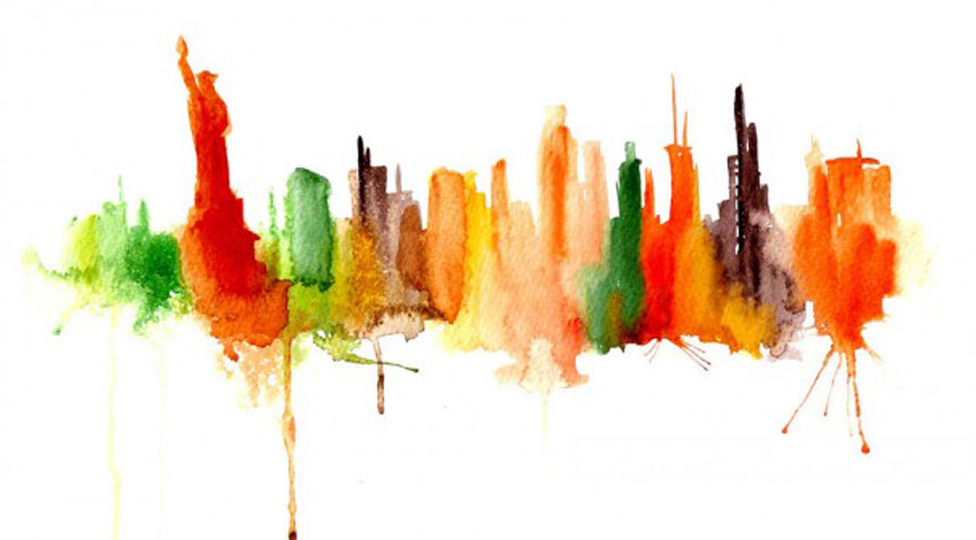 If you’ve ever tried to paint with watercolors, you probably know how difficult they are to control. The water gives the paint a mind of its own, and while that can end in paintings with mysterious and beautifully chanced results, most often everything just turns into a brown, wet puddle.

Elena Romanova‘s cityscape watercolors demonstrate professional control while still allowing a loose, individualized painting style. If you blur your eyes or quickly glance at her paintings, they can look like bright blobs of color or uneven stripes. However, if you really focus in on the image being made, iconic buildings and landmarks easily make themselves known in the paint. Simple but astonishing, these paintings are clearly the work of someone with as much artistic merit as technical training. Well done, Romanova. 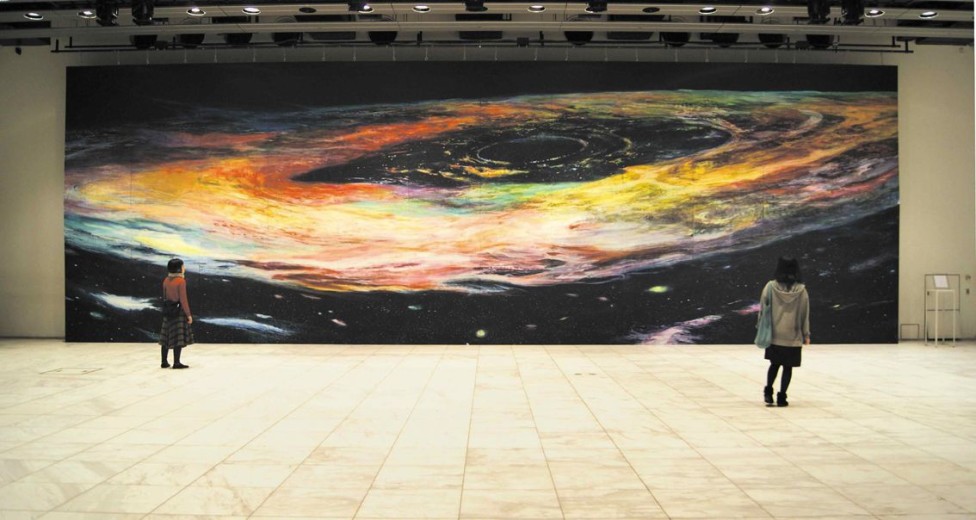 Since 2003, artist Hiroshige Kagawa has been creating large-scale paintings at a pace of about one painting per year. Dabbling with mostly nature and space motifs, his work took a shift in 2011 after the devastating earthquake and tsunami that struck Japan. His recent works harken back to the disaster, with paintings that range from destroyed nuclear reactors to ravaged areas full of destruction. Although he has cropped pictures of his paintings on his website, we love these photos that have the people standing in front. It really shows how massive these paintings are and how patient and meticulous he must have been to be able to finish each one. Simply awesome. (via Spoon & Tamago)